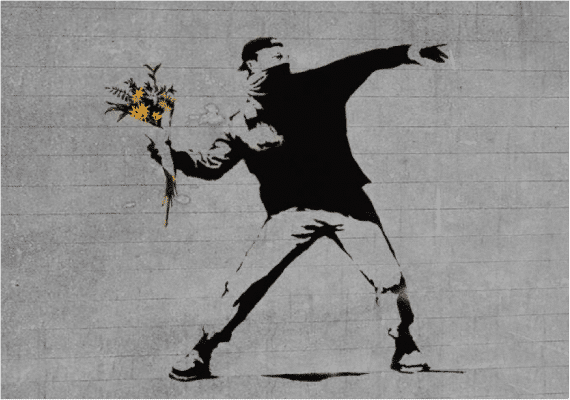 Banksy, many would agree is the most diverse, controversial street artist of his time. Some would say he is, justifiably, the best artist in the world. Although so many praise his passion and impact, his identity remains unknown, why? Well no one exactly knows. His unknown persona gives a mysterious feel to his work. His art is produced all over the world; he has worked many different types of street art media and types containing many controversial yet viral, political images.

One of Banksy’s role models in the world of art is Blek Le Rat. Many have noticed Banksy tends to recycle some of Blek’s old ideas.

Known as DryBreadZ crew or DBZ. He started his career in 1990 as part of a graffiti gang in Bristol, England. Shortly after this he began to partner with the respected and well known graffiti street artist, Inkie.

Arrested for vandalising public spaces at the age of 18, his crew fled and left him to handle the situation on his own. It was after this that Banksy began to produce his work under the influence of stencils. After many attempts of his new approach, he decided this would be his new graffiti type.

Banksy uses multi-layered stencils combined with in depth media sources such as spray paint. He also collects pieces from the streets such as signs, objects and other materials to bring his work to life and project his message. His work is often humorous and spreads an element of politics and philosophy.

Banksy relocated to London by the 2000’s. He began to internationally gain recognition through exhibits and displays. Shortly after this, Banksy made one of his biggest and iconic achievements to date which many know him for. He travelled to Palestine and the West Bank to stencil nine images on the Bethlehem Wall. This made his work go viral and instantly hit and over powered social media, exploding on the Internet. His stencil paintings were accumulating record breaking sales in the art industry and everyone began to know his name. His work began to be a huge 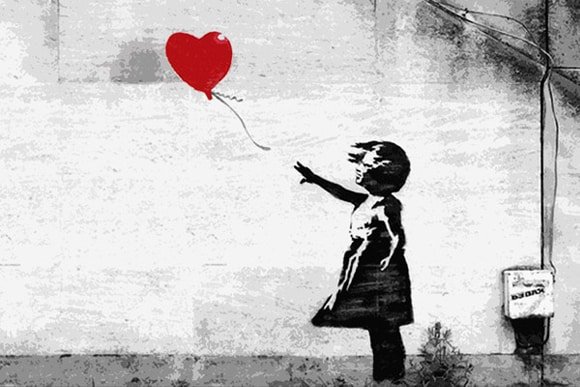 hit in art auctions in Sotheby’s and Bonham’s of London. His most recent achievements was becoming the author and director of the film ‘Exit through the Gift Shop’ in 2010.

After all of his success and praise, very little can be found about Banksy himself. He refuses to take part or be interviewed. Carefully maintaining hid secret identity.

It is astonishing how an artist as renowned as Banksy has managed to make himself one of the greatest artists of all time without the world knowing anything about him, many would agree he lets his art speak for him. Banksy changed the stigma about street art. Thanks to him, the approach now plays a key part in the industry. His work never disappoints, leaving fans speechless.

The term ‘Banksy Effect’ is also a term that the artist started, a way of visually interpreting his work. His tactic is to allow an individual to look at his work and their curiosity to explore an entirely new idea, vision and perspective resulting in artistic creations and inspiring new artists, known as the ‘Banksy Effect’ 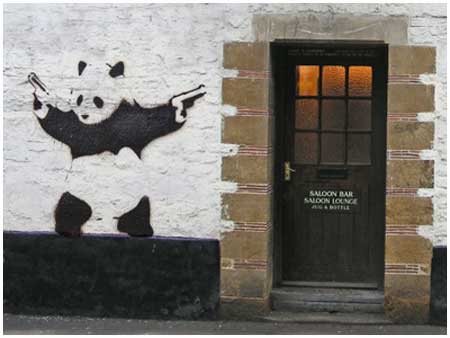 His identity always has and will continue to be questioned, many journalists have attempted to investigate his personal life, making tracks back to his early career and childhood in Bristol. Recently, a journalist revealed he could have gone by the name of Robin Gunninham. This may be true however, Banksy continues to keep his identity unrevealed at his best efforts. Interestingly, Banksy has managed to not only conceal his identity from the world but also his family too. The identity of Banksy remains a mystery.

In conclusion, Many will see his artwork. He has covered Australia, Israel, England, Canada and even Jamaica. Most recently, he spent an entire month glamorizing New York City, United States with his street art, grabbing and capturing thousands attention every day. Who knows if his identity will ever come to light, regardless his art work will continue to speak for itself.

If you want some Banksy art in your home or something a little different, click here. We offer a wide variety of his best work. Each print can be adhered to most surfaces.

If you’re looking to transform the appearance of your office, workspace or company branding then get in touch with our team of experts.

We use cookies on our website to give you the most relevant experience by remembering your preferences and repeat visits. By clicking “Accept All”, you consent to the use of ALL the cookies. However, you may visit "Cookie Settings" to provide a controlled consent.
Cookie Settings Accept All
Manage consent

This website uses cookies to improve your experience while you navigate through the website. Out of these, the cookies that are categorized as necessary are stored on your browser as they are essential for the working of basic functionalities of the website. We also use third-party cookies that help us analyze and understand how you use this website. These cookies will be stored in your browser only with your consent. You also have the option to opt-out of these cookies. But opting out of some of these cookies may affect your browsing experience.
Necessary Always Enabled
Necessary cookies are absolutely essential for the website to function properly. These cookies ensure basic functionalities and security features of the website, anonymously.
Functional
Functional cookies help to perform certain functionalities like sharing the content of the website on social media platforms, collect feedbacks, and other third-party features.
Performance
Performance cookies are used to understand and analyze the key performance indexes of the website which helps in delivering a better user experience for the visitors.
Analytics
Analytical cookies are used to understand how visitors interact with the website. These cookies help provide information on metrics the number of visitors, bounce rate, traffic source, etc.
Advertisement
Advertisement cookies are used to provide visitors with relevant ads and marketing campaigns. These cookies track visitors across websites and collect information to provide customized ads.
Others
Other uncategorized cookies are those that are being analyzed and have not been classified into a category as yet.
Save & Accept